There was no surprise as to who took the top spot in this weeks UK video games chart, as Aliens: Colonial Marines hits the number 1 spot. The game always had a massive chance with it’s overall fan base and the fact that the actual game is not that bad either.

It is now the biggest release of 2013 in the United Kingdom and will surly be in the top ten for quite a while yet. The new Aliens game has had extensive advertising all over the world and the UK was targeted more than most. This marketing seems to have paid off with amazing results aswell.

Dead Space 3 is in at second place after a drop in sales of 57% which is not what the game developers would have wanted after a little while after it’s release. Halo 4, FIFA 13, Call Of Duty: Black Ops 2 and Assassin’s Creed 3 are all still going strong this week too.

The Devil May Cry reboot has been nothing short of a flop in the UK as it leaves the top 40 altogether. Here is the roundup of the top ten UK video games chart below.

Be sure to check back with us next week to find out if Aliens: Colonial Marines keeps it’s place at the top or whether it gets knocked off top spot. 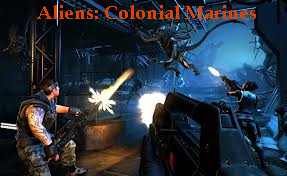