Finally Drinkbox Studios have given Guacamelee a release date for April 9th in North America next month. The upcoming adventure game will be available for the PS Vita and PlayStation 3 respectively. The game will take part in a cross-buy service that Sony are launching.

This simply means, that when you purchase one of the versions for the price of £9.90 or $14, you’ll actually get the other version for free. Guacamelee’s release date for Europe is just a day later with it shipping over to European shores on April 10th.

In Guacamelee, players will take the role of Mexican (Juan Aguacate) in a quest to find and save El Presidente’s daughter who’s been kidnapped. The location is within a small Mexican village and there’s even the feature to jump between two different dimensions as well.

There’s one dimension called “The Living World” and the other being “The Dead World” which is rather exciting. We’ll have a review up of the game as soon as it’s released on the PlayStation Vita and PS3. 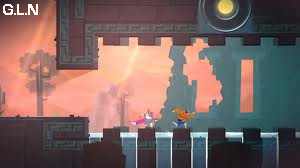