The game is a PC exclusive and the eighth standalone game in the entire Total War series. The latest footage focuses on the naval units and the tactics that they employ whilst out at sea. Gamers can get a first-look at the Firepot Dieres assault ship, oaken Heavy Raiders of the Barbarian navies, and the stout.

The video also showcases the use of boarding and ramming other enemy ships as well. It’s just under four minutes long, so there’s enough time to cover the basics in regards to the game’s sea battles.

Total War: Rome II will be fighting it’s way to the Windows PC on September 3rd 2013. Check out the new video below, and leave your comments in the box.

Here’s some screens we thought we’d throw in for good measure as well, enjoy! 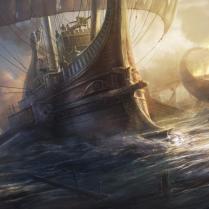