Batgirl images have been seen on various occasions in the Xbox Live Marketplace recently. This means that Injustice: Gods Among Us might be getting Robin & Batman’s sidekick in the next available downloadable content pack.

Batgirl seems to pop up in what seems like some sort of glitch, before disappearing into thin air. This glitch does seem to have been sorted out now as there have been no more sightings. If she is to join the next released DLC, she would likely be another inclusion in the season pass.

Lobo will become the first downloadable character available to gamers on May 7th, so we could see her join him next week. The game is full with male villains and heroes, but the lack of female characters in the game make for a breath of fresh air that Batgirl will now join the ranks.

If you haven’t already, check out our full review on Injustice Gods Among us and leave your thoughts. 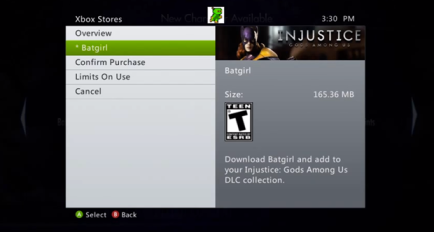 Injustice: Gods Among Us Batgirl