Gamers and fans of the Iron Man franchise can now get the official Iron Man 3 video game app for free. You can download the app which is specifically for Tablet and Android devices at the Google Play store.

All you have to do is visit the Google Play page and then click on the blue install button which is designated on the page. Then you’re good to go and can play as Tony Stark to your hearts content.

The 3D game is not bad for a freebie and is well worth downloading just to play as the billionaire hotshot. Three locations are playable in the game, and they include China, New York City and Malibu Shores.

Tony Stark’s villains are also available in the game to do battle with which include Ezekiel Stane, M.O.D.O.K, Crimson Dynamo and Living Laser. The graphics are not actually that bad, and the animations do the game some justice. There are 18 available suits to unlock, and you can also have to option to upgrade your weapons, powers and armour in the research lab.

You’ve got to remember that this is a free-to-play game which makes it very hard to give it any criticism. Go check it out and see for yourself what Iron Man 3 the official video game plays like. 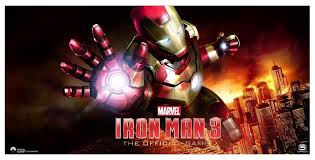