Mojang has announced that the new Minecraft update will add Mules, Donkeys and Horses. The minor update will go live on 1st July early next month and is more commonly know as the Horse 1.6 update. 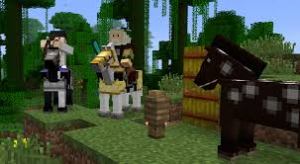 It’ll also add blocks of coal, carpets, hay bales, horse armour and name tags too. Gamers will have to note however, that the new update will require a new launcher that can easily be downloaded from the official Mojang website.

This news arrives a day after yesterday when it was revealed that the PC edition of Minecraft sold well over 11 million copies worldwide. Also, during Microsoft’s E3 presentation, the game was confirmed for a future Xbox One launch too.

Well over one billion hours of gameplay has been spent playing the  block-building title across 66 different countries. Check out the full list below of what’s going to be added to the game in July.