A brand new trailer that’s just been released today by EA Sports for FIFA 14 concentrates on the art of shooting and scoring past your opponents. To be precise, the Real Ball Physics and Pure-Shot are on the agenda as EA look to show fans what’s install for them come next month.

Footage shows clips such as looping and swerving the ball in the direction you want it to go in. Also, players having the ability to refine their position on the pitch before they go ahead and strike the ball.

The lead gameplay producer Aaron McHardy said: “Players have the intelligence to be able to prepare before they strike the ball,” he added: “They can adjust their stride in order to get a perfect strike.”

The logic behind this new realistic feature, is that players in real-life wouldn’t shoot with their weaker foot. Instead, they’d rather shift the ball to the side and hit it with their much favoured foot. 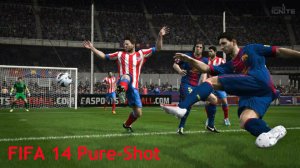 The highly anticipated football/soccer game shoots it’s way to you on September 24th in North America, and September 27th across Europe. Take a look at the new video released today by EA below.