Spartacus Legends is one of the unique fighting games that has been recently launched and is based on an international hit series. The game features some of the most popular characters from the TV series. It also features numerous ruthless weapons that can be combined to form a robust skill system.

The game delivers many tool options for the gamer to customise their gladiators and destroy their enemies. The gamer is able to fight as Spartacus, Crixus and their very own gladiator who they’ve created to fight online battles with friends. The online multiplayer games also allow the players to join the list of worldwide leaderboards.

Spartacus Legends will require you to be connected to the game servers constantly for you to be able to operate. Once you’re connected to any of the servers then you gain control over one gladiator and you can start to establish your dominance.

This involves gaining both riches and fame as you progress with the game. There are eight diverse styles of fighting that the gladiators can have with each style having a unique selection of weapons. At the start you’ll have few options to choose from in terms of weaponry and armour.

However, as the game continues and your fame increases as you win fights and get more crowds then the options of equipping your gladiator also increase. You will also note that the weapons and armour get stronger and deadly. The good thing is that you can customize weapons for each fight.

The game is made up of several zones that contain different fights. As your fame level rises you will open up more zones and therefore access more fights as well. The main objectives of the player in Spartacus Legends is winning the entire Primus fights and also defeating the legendary gladiators of each zone.

The Primus fights refer to the fights that you will have with tough opponents which you have to win for you to unlock the leader of each zone. You will be required to use a gladiator with a specific fighting style for you to win the Primus fights, this makes it more challenging.

Once you’ve completed and won all the Primus fights in a zone you can then fight the legendary gladiator. This is an enemy who is more powerful than the gladiator that you are controlling. The power of the gladiators is measured by their rankings. 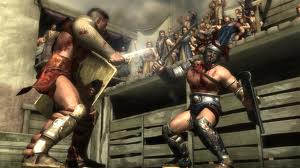 Besides the fighting experience that you get in Spartacus Legends it is very similar to the applications that allow you to earn silver and making payments in gold. You will have to do this so that you can increase the rating of your gladiator and also to recruit more slaves who can do the bidding for you in the arena.

The fight that you win will mean more gold for you and an increase in your fame. As you accumulate the winning you will be able to get better weapons and armour so that you can amaze the crowds and win more fights. It is satisfying to watch the crowd meter increase as you have gruesome finishes.

Our score for Spartacus Legends is a Rating: 6 out of 10 overall.