There’s been plenty of new videos showcasing the gameplay of the upcoming adventure game (Assassin’s Creed 4: Black Flag) in recent weeks. Now though, VG247 have uploaded a never before seen footage of some ship carnage on their official YouTube channel.

We were all expecting epic ship battles in the latest installment, that goes without saying, so now is your chance to get a sneak peak at what to expect this fall. The stunning visual effects of the ships exploding into a thousand pieces could really be watched over and over again. 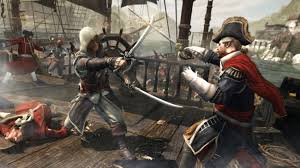 You also get to see pirates getting ready for a full on fight with other neighboring ships at sea. Assassin’s Creed IV: Black Flag is due out on PS3, PC, Nintendo Wii U and the Xbox 360 in late October and early November 2013. The next-gen versions will be out when the Xbox One and Ps4 are released respectively.

Take a look at the brand new gameplay coverage below and leave your thoughts in our comments box.