Warner Bros. Interactive Entertainment has announced that a Man of Steel Superman skin will be arriving as part of  downloadable content pack for popular DC game Injustice: Gods Among Us. 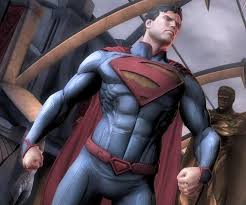 The character will be based on the newly released hit motion picture movie, and will not be portrayed as the original Superman that we all know. The upcoming skin will be priced at 80 Microsoft Points $4.46 / £2.39.

Arriving in July will see General Zod become part of the DC Universe line-up. He’s based on NetherRealm’s own personal take of the DC Comics character. His character will be priced at $6.18 / £3.99 on PSN, and 400 Microsoft Points on Xbox LIVE.

You can check out the first official gameplay trailer for General Zod below and leave your thoughts in the comments box.