The WWE 2K14 developers (Yukes) has unveiled the brand new campaign mode ’30 Years of WrestleMania’ which will include some of the most epic fights in the entire legendary pay-per-view history. 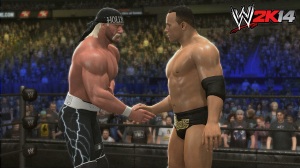 It will be similar in a lot of ways to the main career mode, which is based on the history of Monday Night Raw. The new game mode will launch players into 45 of the most iconic matches that includes Andre the Giant Vs Hulk Hogan which was at WrestleMania 3.

The senior director of Marketing at 2K Chris Snyder said in a statement:

“For nearly three decades, WWE has inspired millions worldwide through the historic, cultural and undeniable phenomenon that is WrestleMania.

“Through the 30 Years of WrestleMania Mode in WWE 2K14, players can now relive their favourite nostalgic and recent WrestleMania moments – from an incredible roster to authentic presentation and match play – in a unique and engaging way.”

The original and much-loved WWE commentator Jim Ross is to make the announcement of the mode’s full roster via Twitch on August 17th at approximately 20:30 p.m. BST.

The best WWE superstars of all time will return in their original outfits, ready to fight their nemesis’s in re-created depictions of their matches. The Monday Night Raw mode from WWE 13 went down very well with wrestling fans worldwide, so if this new mode is anywhere near as good as that, then we’ll be very excited.

Check out our gallery of the big confirmed stars that will feature in 30 Years of WrestleMania below.

WWE 2K14 will throw it’s way to you on October 29th in North America, and across Europe on November 1st for the Xbox 360 and PS3 platforms.