Developers Ubisoft have made the official Gamescom trailer for Assassin’s Creed IV: Black Flag available at long last. The footage shows off Edward Kenway using stealth to his advantage in taking down pirate ridden opponents by jumping from rooftops and sneaking up behind them like a master in disguise. 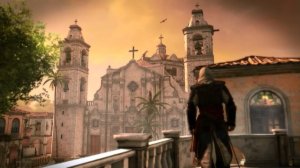 The video showcases mostly land-based action, which is a nice touch, considering that we’ve mostly seen footage of Black Flag on ships and plenty of naval battles. So this is a breath of fresh air so to speak, and it follows on from the PS4 Gamescom trailer that was released a couple of days ago. You can view the trailer below and leave your thoughts in the comments box as well.

Assassin’s Creed 4: Black Flag lands on the Xbox 360, PC, PS3 and Nintendo Wii U on October 29th in North America, and November 1st in Europe. It’s going to arrive on the PlayStation 4 as a launch title, and the Xbox One at a later date.