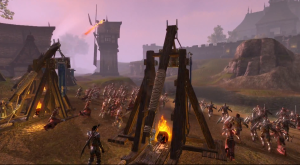 We’ve had well over 3 million beta sign-ups, which we haven’t announced before.

PCGamesN decided to compare this to the beta stages of Guild Wars 2, with sales of 2 million. Also, massive MMORPG WOW actually peaked at 12 million subscribers at one stage when it was at it’s highest peak, even now it still holds over 7 million subs.

With regards to the numbers that are in testing, Firor gave a figure that was not exactly precise, but more an estimation.

TESO will be arriving on the PS4, Xbox One, PC and MAC at some point in 2014 next year. It’s going to require gamers to opt for a monthly subscription.