A new feature called (early access) has been launched by steam in an attempt to join video gamers and developers together in a community. Now the gaming community can play selected and upcoming titles, whilst they are still in their early development stages.

Gamers will be given the opportunity to experience the full development process and exactly how it works first-hand. Also, while the specific title is still being made, gamers can interact with gaming developers and provide their own personal feedback on all the top video games.

This feature comes across as a cure to get all the feedback from customers on all the possible bugs and errors early on to combat in-game problems. It’s certainly not a bad idea either. 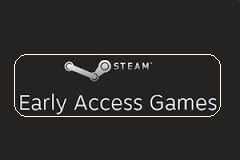