Now with this latest revelation, it gives gamers a date that can get anybody excited. The fact that the date of the 29th October is the exact same day that Assassin’s Creed 4 Black Flag is released, means the day could be an exciting one for the majority of the gaming world.

Denny Atkin was the man behind the post, and he’s the Xbox.com games editor. So it can’t really get anymore legitimate than that really. The case can only be that he had inside information and has leaked it out either by mistake, or he just couldn’t hold his tongue much longer.

You can’t blame the man though, if B4 is to be a next gen video game, then it could turn out to be a very merry Christmas indeed. The date does seem to go with the type of traditional date that Dice and EA tend to go for as well. With B3 being released on October 25th 2011. 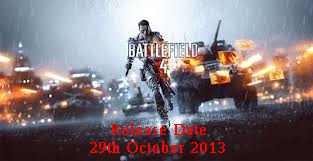