Beyond Two Souls Dated For Europe

Beyond Two Souls has been given a UK and European release date by Sony to be the 11th of October 2013. The PlayStation 3 exclusive was previously given an October 8th 2013 North American release date and sometime in October. Now the dates have all been cleared up and the North America launch day still stands.

Quantic Dream’s Beyond Two Souls is in-fact a sequel to the other PS3 exclusive Heavy Rain. Players will take the role of Jodie Holmes who’s gifted with some super cool powers in a game that spans well over 15 years.

David Cage who’s the Creative Director has come out and said that the title will have a decent lifespan and will last around 10 full hours of rich gameplay. The psychological action thriller also has none other than Willem Dafoe playing scientist Nathan Dawkins in a supporting-role.

His character works for the government studying entity’s and various paranormal activity. If you’re into video games that fall into the thriller genre, then you might want to check this game out. 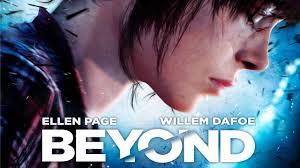