The latest installment of the Resident Evil franchise didn’t go down to well with the majority of their die hard fans. Resident Evil 6 which came out in 2012 was to some extent a failure by developers Capcom.

To make up for this terrible injustice to the much loved gaming series, Capcom have now announced that there will be a host of new features on the new DLC which releases in March 2013.

This will be a online mode which will involves players having to protect the AI controlled characters with certain tasks in the form of a siege. The game makers have said that they were also disappointed with the reviews that the game got and hope to make things better with these new gameplay modes and free updates.

The completely free updates will be eligible for the PlayStation 3 and Xbox 360 formats respectively. The add-on will work as a totally new game in some aspect but it will also add a fair bit of content to an already large game.

During the new gameplay you will be split into two entirely different teams with one of the teams taking complete control of the monsters. The other team will be the hero’s and the main characters of the game which you will have the choice of choosing who you will be.

It is a very clever idea and one that GLN thinks will work, but will also get more people playing on Resident Evil 6 a little more often than usual. Everyone likes new ideas and gameplay when it comes to video game and the real winners are the downloadable content.

You will also switch sides from round to round so everybody will each take a turn to be the monsters and the real in game characters. To win for the hero’s, you will have to evade the monsters in what we suspect will be a time trial type of game mode.

To win for when you are playing as the monsters, you will simply have to kill everyone and everything that is in sight. A very well thought out process that is surely going to be a big hit for Capcom.

Resident Evil 6 is due out for release on the PC format around the exact same time in March. The siege game mode will be around £3 to purchase which is not a lot when you look at all the other DLC prices on other video games.

The Onslaught, Predator and Survivors game modes that were previously released are also available at the same price and will be out on the PS3 in February. 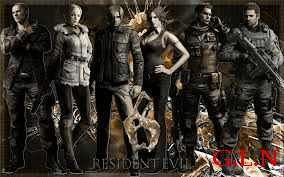