Good news for Xbox 360 owners, finally the COD: Black ops 2 revolution DLC is now out on Microsoft’s video game console. We have put up a post of revolution already, but that was more for general information and you can find it using the COD tag on our site.

Revolution will be packed with four of the best new multiplayer maps, some new weapons and you can even become a zombie in a totally new gaming mode. There have been many rave reviews on this new feature and we are keen to follow suit.

This latest DLC is the most expensive ever in Activision’s entire history! Activision are the game developers and they look like they have delivered a fine game in Call of duty Black ops II.

The four maps are called Downhill, Mirage, Hydro and Grind which are all action packed to the bitter end. There is even a special zombie map you all you undead fans which is called (Die Rise) and it will certainly keep you going.

This map will consists of hundreds of blood sucking zombies chasing after their meal. You will be put into a maze of various skyscrapers in a little Chinese city to fight for your life. This is also the level where you will ultimately be able to play as a zombie yourself.

With a bonus weapon, new maps to explore and being able to actually play as a zombie, revolution is sure to please the majority of Call Of Duty fans. 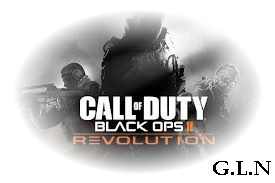