There will be a teaser God of War: Ascension demo out next month for gamers of the franchise to get a sneak peak at what the full game has to offer. The computer giants “Sony” made the announcement and said the demo will definitely be out for February time.

The demo is expected to have quite a considerable amount of gameplay in it than any other demo’s released. It will be a single player demo but it will give fans the chance to test out the new revamped controls. We will have loads more details up about the new God of War: Ascension demo in the not so distant future.

God of War Ascension will have a collector’s edition made to the public and is the 7th game in the long running God of War series. The latest (Ascension) will in fact be a prequel to all the other installments. The new game will also be the first in the franchise to introduce the multiplayer game mode.

The full God of War: Ascension game will have it’s official release date for March 12th 2013. Stay up to date with the series here at GLN and we will keep you informed on the latest happenings. 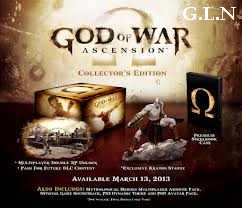 ← All The Tomb Raider Achievements For Xbox 360
The Elder Scrolls V: Skyrim PC DLC Out February →