After 6 months of FIFA 13, finally there has been officially news announced by EA Sports regarding their upcoming football title FIFA 14. Yesterday, the official Twitter account tweeted saying for it’s followers to retweet if you are excited about FIFA 14 news coming tomorrow.

Well, now it’s tomorrow and EA have been true to their word and giving out loads of details about the highly anticipated game. Here’s the lowdown of what to expect when the game is launched later on at the end of this year.

One of the new features will be the ability for the players to keep hold of the ball and ensure that they keep possession. This will involve great muscle and determination and players with body balance and strength will benefit the most from this.

This will be a major part of the game, hold-up play is what’s used in the real life game and this will only ensure that FIFA 14 has total realism integrated into it. Imagine using strength to shield the ball and then turning to unleash a devastating shot into the top corner.

This type of game-play is what fans of the franchise have been screaming out for the entire time! Players will likely make runs forward whilst the big man holds up play to try and find a pass to open up defences. We’re looking forward to this feature and no doubt most gamers will be too.

The next feature that will be showcased in the upcoming title is the pure shot feature. This new addition will make every single shot you take with a striker or midfielder, different every single time. Also, players will have to be balanced when striking the ball otherwise the shot will most likely go wide of the target.

Defenders pulling your shirt or should barging you off the ball will also contribute to the outcome of the shot. The swerve on the ball when striking has also been tweaked by EA a little. This will make curving the ball into the top or bottom corners all that more easier to perform.

The overall shooting mechanics have been completely revamped for FIFA 14 in an attempt to make it have a more realistic feel to it. The trajectory and physics of the ball whilst in mid-air will also have an effect. That’s what brings us to our next point.

As you can probably guess from the heading, the ball physics in FIFA 14 have been carefully looked at and improved accordingly. Now, when you pass the ball with a player using a long pass to spread play, the football will move in the air just like a real life match.

Gamers will now have to be at the top of the game if they are going to accomplish a pinpoint long pass each time they wish to do so. The lobbed through balls are also going to have the option of a little swerve on them if the player chooses to do so as well.

Most probably the new feature that will be music to all the FIFA gamers ears is this little beauty. Now it’s possible on FIFA 14 to do certain skill moves whilst you’re actually running with the player and the ball at his feet. Yes, you heard us correctly!

There’s a catch though, the players that try these types of moves will have to be blessed with substantial ball control, body balance, dribbling and most probably 5 star skill moves too. This is just us guessing, but from what else we’ve heard, that’s very much the case.

EA have said that the ball will be knocked forward each time a player takes a touch whilst sprinting at full speed down the wings or through the middle of the park. This will invite a challenge from the opposing defenders as that will be the chance for them to try and regain possession of the ball.

They also confirmed that players will not be able to turn from left to right or vice-verse as easily in previous editions. Their balance may cause them to either fall over, or be dispossessed by the opponent.

This feature would be fantastic to try out with players like Theo Walcott, Eden Hazard, Aaron Lennon and Luis Suarez. The fact that Suarez falls over and still retains possession in real life will be ironic really. 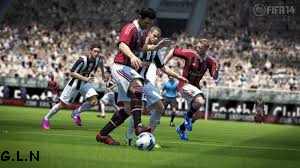 FIFA 14 will now possess a new revolutionary system called Teammate Intelligence. This feature will consist of attackers making good timely darting runs to support a break away attack. For defenders, this feature works more in their favour if anything.

Defenders will now be more smarter in the preparations to stop a building attack from commencing. This includes staying as a pack in their own penalty box and getting all the blocks in. Marking their opponents sublimely to not give them an inch to play with.

They’ll also follow runners that make them darting runs into the final third and try and cut out the passes. It sounds to us that there will most probably be four John Terry’s at the back in FIFA 14. This is not a good thing if you want to score lots of goals.

EA Sports have confirmed that it’s going to be the hardest by a country mile in the whole of the FIFA football video game series to score a goal. They’ve said they the good side to this though, is when you do hit the back of the net, you’ll celebrate like there’s no tomorrow.

Carefully thought out build up play is the way forward in the this years addition. Passing the ball along the ground and mixing up your play is the best way to grind out results for your club.

It’s now going to be even easier to scout potential targets ready for the transfer window on FIFA 14. There’s a brand new hub that will allow for the easiest of navigation as the scouting system is revamped for the new game.

Managers can now scout for players all year round and even find out the traits and specialities of players straight away. Finding talents from all over the globe is now a reality in career mode.

In addition to all of the above, there will be 500 officially licensed football clubs in the game. More player faces from the face capturing that has gone on all year round. Not to mention additional new leagues that will be added too.

FIFA 14 will be out this fall on PC, Xbox 360, and PlayStation 3, with no mention of the Wii U, PS4 or Xbox 720. Perhaps EA Sports will announce something closer to the launch day. Are you excited about the announcement of FIFA 14? Get in touch and let us know here on GLN.