Twitch and Microsoft have officially announced that the Twitch App will be launching today on the Xbox 360 gaming console. The super cool app is an exclusive to Xbox Live Gold members. What the app does, is enable gamers to view special events and live streams of game-play with ease.

Every product has it’s pros and it’s cons, well the Twitch application is no different. The downside is that you won’t be able to stream footage from your console. This doesn’t matter to PlayStation fans, as Sony Computer Entertainment will be implementing that service to their upcoming next-gen PS4 console.

Xbox 360 users will only have access to the top 300 channels in regards to content. Specific channels and special live events will also be available to access too. Twitch have revealed that more than 800,000 people stream their game-play using their smart software.

With the Xbox reveal event coming up, if you launch the app in time, you’ll be able to catch Microsoft’s Major Nelson’s post-show broadcast. Use the app on the 21st May at noon Pacific time to see it, or go directly to Twitch.tv instead. 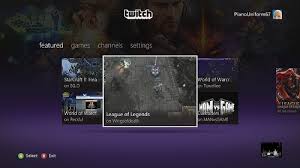