Our Preview On DMC (Devil May Cry)

December 9, 2012 · by gameslatestnews · in Latest Games News · Leave a comment

Capcom are on the verge of one of their most loved games release date which is due to hit us in January 2013. Other than the Resident Evil series, Devil May Cry is their most famous and has a huge following because of it’s massive success. We are really big fans of the franchise and cannot wait to give a review on the game after playing it.

Here though for the moment, we are going to preview it a month before the big day of it’s release globally. So DMC: Devil May Cry as it is known for this version of the game is a remake if you will of the original. Some gamers have said that it is far too early for a remake considering the first game only debuted back in the year 2001.

For this game, Capcom are somewhat involved but not entirely as they have given game production responsibility to a UK company. The organisation that took over are called Ninja Theory. They have been a big help in the making of games such as Enslaved.

DMC will be available on the PS3, Xbox 360 and PC for the time being, but more consoles may look to have a version made for them. The main character Dante returns as the games hero once again. As for the gameplay, it remains solely the same and unchanged much to the satisfaction of the series fans.

A big difference that players will notice while playing the new Devil May Cry game is Dante’s hair is not he’s normal trademark bleach blonde white hair. It’s because this is a younger Dante supposedly before he decided to dye it.

We shall be covering Devil May Cry a lot over the coming weeks as it is one of our personal favourites. Stay in contact with games latest news to get updates from now until January 2013. 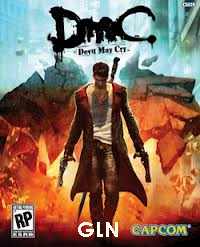